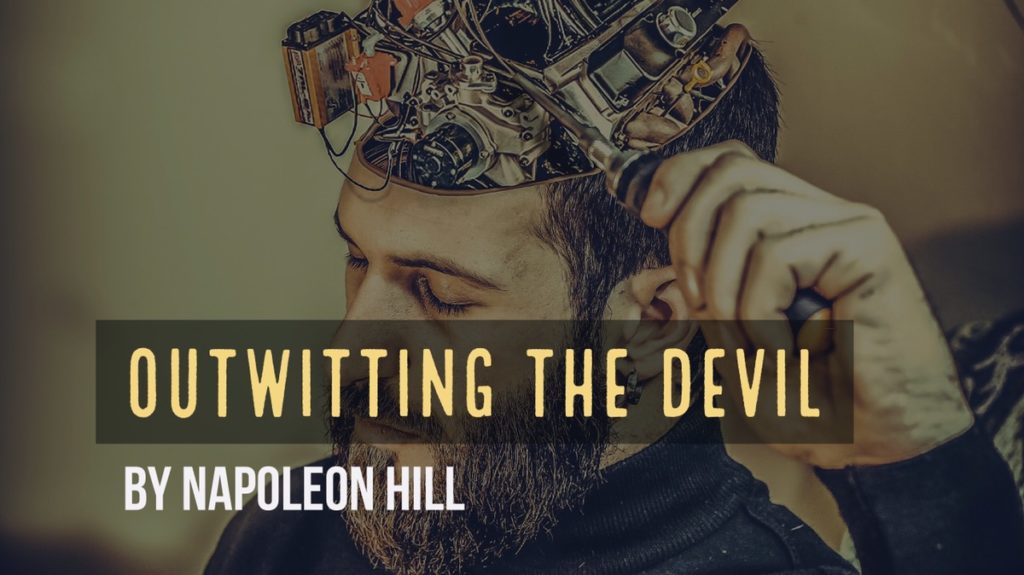 Outwitting The Devil is Napoleon Hill’s less popular book, but holds many gems to expand your personal development journey.

Outwitting The Devil – in one sentence:

Key lessons from Outwitting The Devil

Quotes from Outwitting The Devil

“Fear is the tool of a man made devil. Self confident faith in oneself is both the man-made weapon which defeats this devil and the man-made tool with builds a triumphant life. And it’s more than that. It is a link to the irresistible forces of the universe which stand behind the man who does not believe in failure and defeat as being anything but temporary experiences.”

“The fear motivated old self is not dead, it has merely been dethroned. And it will follow you around wherever you go, awaiting a favorable opportunity to step in and take charge of you again. It can gain control of you only through your thoughts. Remember this, and keep the doors to your mind tightly closed against all thoughts which seek to limit you in any manner whatsoever and you will be safe.”

“Do not permit yourself to worry about the money you will need for your immediate expenses. That will come to you by the time you must have it. Your only limitation is the one which set up in your own mind.”

“My other self has taught me to concentrate upon my purpose and to forget about the plan by which it is to be obtained when I go to prayer. I’m not suggesting that material objects may be acquired without plans. What I am saying is that the power which translates ones thoughts or desires into realities has its source in an infinite intelligence which knows more about plans than the one doing the praying.”

“Stating the case in another way, may not be wise when praying, to trust the universal mind to hand over the plan best suited for the attainment of the object of that prayer? My experience with prayer has taught me that so often which results from prayer is a plan (if the prayer is answered at all), a plan that is suited for the attainment of the object of the prayer through natural and material media. The plan must be transmuted, through self effort action.”

“I know nothing about any form of prayer which can be induced to work favorably in a mind that is colored, in the slightest degree, by fear.”

Results After Reading This Book

Following my reading of Outwitting The Devil, I began paying attention to my own inner voice.

At first it was strange. But after a few days I got comfortable with it and began asking questions of my inner voice.

I was pleasantly surprised about the quality and the clarity of answers that came back.

Read this book and give it a try. It might make a positive impact.